In 1994, Mr. Kit Yong, an immigrant from Singapore, decided to create an informal Mandarin Chinese language class for his children when he was unsuccessful in finding one in Indianapolis. With the help of Ms. Suju Li, an immigrant from China, a total of three families with four students came together in Forest Glen Elementary School in Lawrence Township for Chinese language instruction. Forest Glen Elementary School had graciously agreed to loan its classrooms to the small group on Friday evenings. This initiative seeded the idea of a Chinese language school, which was advertised via fliers distributed in local libraries, Asian grocery stores, and Chinese restaurants. 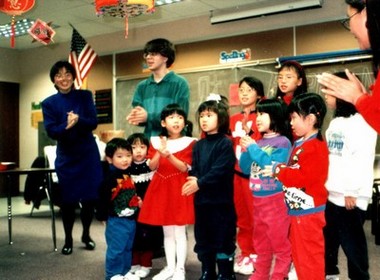 Soon, what came to be called the “Forest Glen Chinese Class” was born, and the school opened its doors on January 20, 1995, with only nine students. Mr. Yong assumed the role of principal while Ms. Li, an experienced teacher in China, became the curriculum director and teacher of one of the classes. A second class was conducted by another parent, Ms. Su Dong. The first cohort of students came from families who were from China, Singapore, Malaysia, Hong Kong, Taiwan, and the United States. The first textbooks used were ordered from Singapore, the only country besides China that used simplified Chinese characters and Hanyu Pinyin. Parent volunteers worked tirelessly to make photocopies of the textbooks for each lesson. On February 3, 1995, the school held its first Chinese New Year celebration in one of the classrooms. With the full support and active participation of what had become eight families, Forest Glen Chinese Class successfully completed its first semester.

On October 23, 1995, ICCCI was incorporated as a non-profit organization with parent volunteers on the board. Mr. Kit Yong became the first president/principal and Ms. Suju Li was appointed as the director of education. While the initial motivation was to teach Mandarin Chinese to children of Chinese Immigrants, ICCCI’s mission was soon expanded to include teaching Chinese to non-Chinese-speaking families and promoting Chinese culture and heritage in Indianapolis. Because of its cultural mission, the celebration of Chinese New Year has been central to the cultural activities of ICCCI. The festival provides an opportunity for students to experience Chinese culture and tradition and allows Chinese families to celebrate this auspicious festival with their non-Chinese friends. ICCCI also actively contributed to the diversity of the local community by participating in Forest Glen Elementary School’s annual international festival.

Today, ICCCI is still run by parent volunteers distinguished by their passion for the Mandarin Chinese language and culture, and their desire to serve the Chinese community in Central Indiana.  Through the years, the can-do spirit of ICCCI’s founders and the hard work of subsequent members have transformed our organization into the largest Chinese community center in Central Indiana. ICCCI continues to bring together Chinese families from different countries in the celebration of their shared cultural heritage today.

“The growing market in China in recent years has further underscored the significance of the importance of the Chinese language.” — Kit Yong, 1995, Founder, President and Principal (1995-1997).